We all know that the guitar is made of pieces of wood, and want to buy a guitar friends certainly will come into contact with the “single” and “plywood”, what’s the meaning of the two words? What advantage is embodied in parts of the veneer, and its timbre than plywood is how much of a raise? Want to know the answers to these questions, then take a look at the following article, believe that after you finished, you will have a more clear concept, when choosing the guitar in the future will be more clear what you want.

A, what is the veneer guitar, face a guitar?

“Single” is made of natural wood;
“Plywood” made by artificial wood (wood chips and powder through high pressure).

First of all, we learn about the what is a single guitar, guitar or veneer. The concept of the “single” can be interpreted as how many piece of wood, but how many “blocks”, this refers to the “layer”, not “spell”, about the concept of “spell” there will be instructions below. That is veneer refers to using a block (layers) of natural wood. Special mention here the concept of the “layer”, because the surface of single guitar, is actually a foreign words, the original word is “Solid Top” in English. Solid is a Solid, real, consistent meaning, and translated into Chinese, is a “single”, the “single” will cause a lot of in this respect no cognitive friend will think really is “single” panel made of a piece of board. 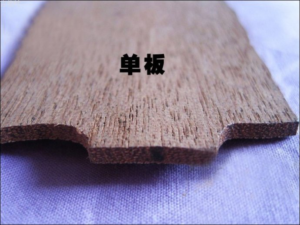 Three, the advantages of veneer guitar:

Guitar sound quality affected by the quality of sound box, a good sound box can make the guitar sound loud, pure, lingering sound waves. Veneer guitar sound box is made by a layer of natural wood panel, compared with man-made plywood, more natural, compact internal structure, to comply with the natural sound principle of instrument, so the frequency of the vibration will be rich and clear than the plywood, achieve better resonance effect. And plywood in the process of vibration is due to a few layers of wood and high pressure synthesis of plywood, the frequency of the vibrations will be unnecessary loss and the phenomenon of irregular, or uneven vibration, which is the main cause of the timbre than veneer plywood. Comparison, of course, is the premise of making the same situation.

And the panel of the guitar, also known as “the Sound Board” is the Sound Board, panel on the tone of the guitar is played a decisive role, then the distance between the veneer and plywood produced the difference on the start. Veneer tone in with the role of time, in the case of proper maintenance, there will be a process of “open”, after open the sound, the sound of a higher level; Plywood can also be “open” in theory, but the “potential” is not big, because it is through multiple processing of wood, and natural wood it is can change in a certain period of time.

In the process of choice, of course, from the sound, touch, price for consideration. You get what you pay for this sentence is very obvious in the middle of the instrument, the gap between 100 and 100 pieces of would be more than 1000 pieces and 2000 pieces of the gap between the obvious, it is very natural economic pyramid between value and price.

In the place where to details, said veneer guitar’s advantage lies in its details. Under the condition of same production process and technology, single guitar sound smooth plywood is no way to match, because the plywood on the “innate conditions” has been lost.

1, the frequency response is balanced. Veneer of each frequency band is very balanced, but also can make each string is an exquisite timbre, especially in the more outstanding music, play some chords tone this advantage is more obvious, every string that dynamic is unmatched plates, fine particle, nuances of finger touch is veneer good performance opportunity.

2, the volume is thick. Veneer and a bit of a volume is vigorous, is not only a simple sound is large, the volume of the veneer large, vigorous, and very have layers, and plywood is often just the volume is big, but the sound field is relatively thin.

3, dynamic is obvious. What is called dynamic? I think this is the language of one is not words but meanings of things, when you understand what is dynamic, you will find how beautiful it is. Is simple rivals on the details of the performance, strength of efforts by the string, and so on, can have very significant difference between the two, and each can perform very well.

4, broad sound field. Veneer of guitar sound field is wider than plywood guitar to many, this is because the veneer of the vibration frequency of the guitar is more complete, inside the box body can with dorsal plate has a very good cooperation relations, the final out the overall effect of the sound will be made more “huge”.

5, natural reverberation. This aspect is due to the “innate conditions” veneer guitar itself, good vibration frequency, let the voice inside the box body, fine and complete equilibrium to last longer, namely portamento will be better, so fermata good naturally formed after natural reverberation, the feeling often playing decomposition is particularly obvious.

6, portamento excellent show on the veneer guitar, of course it is related to the neck and fingerboard, but under the same condition, portamento on veneer guitar performance more incisively and vividly.

7, clear hierarchy. The level of the each of the strings in the sweeping strings together the time is good, but can also listen to come out every string in their work on the “post”, and plywood tend to mix.

About the concept of “spell”, which may be a lot of people is the first time to contact, this is actually a through history of the guitar industry test of a process. Now the vast majority of single, single acoustic guitar face plate, side panel, back is “two spell”, and plywood is more likely to be three or four spell. What is “spell” concept? The following will explain for you:

“Two spell”, no matter from the material of lumber, to the stability of the finished product, to the effect of the beautiful, even the cost is the best choice. Above, there are more “Solid Top” this time, Solid is the entity of meaning, of course, but it also has the meaning of “consistent”, this also in English quite think of opportunely, because now almost all the guitars are two spell, and the two spell is to use the same board level after cutting, like books, turn to, and then by fitting, bonding wood grain after two stone looks like a mirror.

When it comes to select material, can be used to make the guitar wood species are very large, but there is a big area of panel is required, therefore, now the majority of the panel are vertical diameter cut cutting way, because it can have a bigger area and selectivity. And cutting method can make grain will look better, more average, and if it is a horizontal cut, first of all has certain influence to the stability, the second panel will look like a number of rings, not very beautiful.