What is the structure of the guitar

1. head of the piano. There is a string button on the head of the piano and a brand brand of guitar.
(1) Qin tou Logo: brand brand.
(2) string knob: tuning.
2. the neck. There are finger plates, silk, grade and grade on the neck.
(1) finger plate: long board connecting piano head and Piano box, named for its upstream finger when playing.
(2) pillar: metal strip on the finger plate. The casting materials are mostly copper.
(3) character: between silk and silk, some are also called character. From the top to the bottom, the guitar is called one product, two products, three products and four products.
(4) character points: Metallic spots in certain grades. The standard ballad guitar is distributed in three, five, seven, nine, twelve (two grade points), fifteen, seventeen grade, which helps the guitarist to quickly identify the corresponding grade.
3. harp box. The harp box is divided into panels, back plates and side panels. There are sound holes, piano bridges, piano codes, string nails, strings and guard boards on the panel.
(1) sound hole: collect the sound from the strings and use the structure of the piano box to diffuse, strengthen and reverberate, so that the sound will be more beautiful and pleasant.
(2) piano bridge: the main role of supporting the strings.
(3) Qin Code: it is the small white strip above the piano bridge, commonly known as the piano pillow, the piano code in the piano head position is called the Qin code, and the piano code on the piano bridge is the lower Qin code. The quality of the piano code directly affects the sound quality. The material is usually made of bovine bone or plastic.
(4) string nail: also known as the string cones, fixed string. It needs to be pulled out when the string is changed.
(5) string: right to the guitar, from left to right, the six string, the five string, the four string, the third chord, the second chord, the one string, the thickness of the six chord is the coarsest and the finest string. Its looseness can be adjusted by the string knob.
(6) guard plate: right to the guitar, on the right side of the sound hole, its function is to protect the paint of the piano body from
scratching. 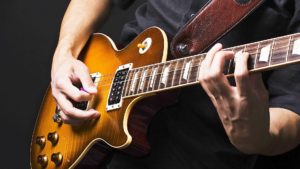